American society needs change as it is reflected from the insurrection at the U.S. Capitol 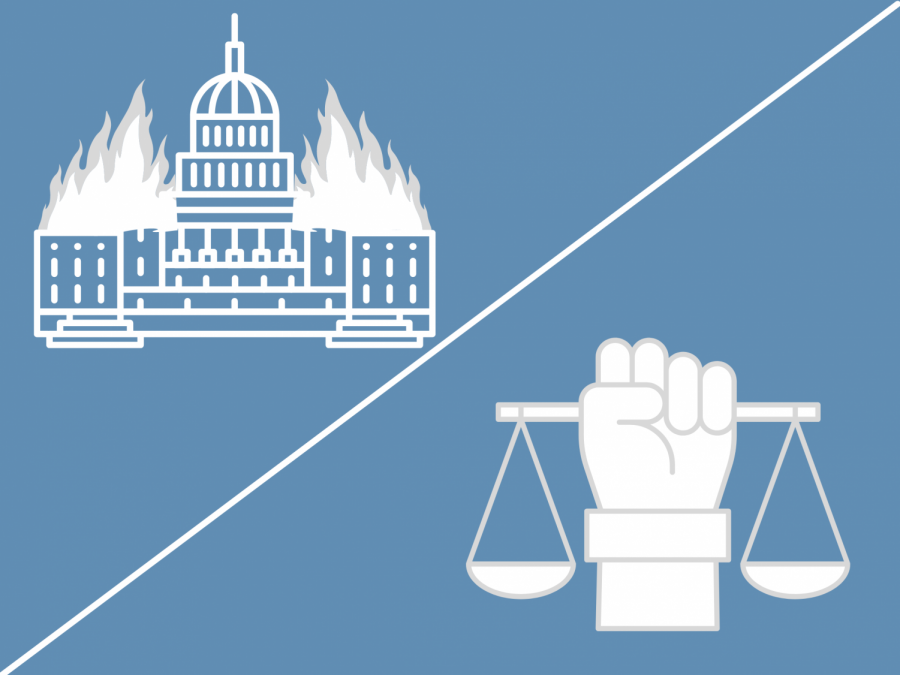 Designed by Aidan Vu on canva.com

Democracy is the process that runs our nation of the United States of America, yet President Donald Trump ― who lost both the popular vote and electoral college vote ― has made it clear that he disregards the entire process, continuing to claim mass voter frauds and a rigged election. He encouraged his supporters to rally against the ceremony of the counting of electoral votes that will confirm the winning of President-elect Joe Biden. Thus, hundreds of Trump supporters gathered at not only the U.S. Capitol, a symbol of democratic government, but state capitals across the nation, including at Austin, Sacramento, Los Angeles, Atlanta, and many more.

During the afternoon of January 6th, chaos erupted: protestors managed to break-in the U.S. Capitol against its “unprecedented” security, the violent-dark historic Confederate flags waved inside the nation’s Capitol for the first times, neo-Nazi’s in “Camp Auschwitz” attire and others with tees that read, “MAGA Civil War” flooded the building, and acts of violence unleashed even to the point of setting up pipe bombs, which were detonated. An entire insurrection, initiated by President Trump, something that has not occurred since the War of 1812 when the British attacked.

AP World History and former AP Human Geography teacher, Elena Diiorio, voices her thought of the breaching, “It still gives me chills, I’m having them right now to think that what we saw on Wednesday was actually the reality of what was going on Wednesday. The idea that you know, we are the first Democratic country. We fought a revolution against tyranny and one against authoritarianism, the established democracy, meaning you know, the ability of the people to voice their desire for their leadership and their popular sovereignty through, not just the president, but through the elected halls of Congress. We’ve set up those institutions and we have cherished those institutions for all these years, because those institutions are the hallmarks of what democracy means. And to watch those symbols, those institutions, be trampled by, you know, by a crowd wearing fur and Viking horns, and with painted faces and flags draped over there. I mean, that was just mind blowing. These are people with intent on bringing down all of the institutions associated with that democracy and that is just devastating, we have to stop that. We have to. We have to do a better job to make sure that this does not ever happen a third time in our history.”

America watched these horrific scenes that spurred from false ideas given by the president, reflecting this modern-society’s reliability and belief of opinions and misinformation without any form of evidence. This displayed how incredibly dangerous social media has become, in fact, U.S. adults who prefer to obtain their news through social media are more likely in sharing or rather spreading false information than those obtaining their news from conventional sources according to a study by the Pew Research Center.

Mrs. Diiorio states, “I think social media…I really do not like social media. I understand that it is a way to keep in touch with people who are a long distance away, but it has also become the biggest device for circulating and re-circulating and then confirming lies and misinformation. Anybody can say anything. You do not know who is saying it or why they are saying it. People do not question the basis of things that are said. So, I think social media is an increasingly major problem.”

What should we do? What can America do to prevent further violent crimes and insurrections? I believe we need to teach the current and future students to understand and recognize false information on social media through media literacy classes.

Mrs. Diiorio, who developed this thought and I completely agree on, claiming, “Media literacy classes teach kids what information is out there, not just scrolling through and getting your ideas off of social media posts. Where is the proof? It is a multifaceted thing. One piece is that I want to teach citizenship, better citizenship in terms of what it’s like to be a citizen here and how important it is to become an educated citizen. We need to teach people that they have to educate themselves and the importance of voting. Another piece of it is that we have to teach kids about the different resources that are out there and to expand their ideas from where they’re getting their information from. We also need to teach kids how to critically think about this information that is available to them in the world. How to digest it better? How to discern whether there’s evidence to back up statements and how to have a more diverse view of the world.

I took ten minutes to talk about what happened on Wednesday, and I fell behind on the content for that class. So that is an issue, which needs to be looked at by the educators as to where we can better serve our students and better serve our responsibility to help you guys learn to be good citizens. This is not to downplay the importance of math, science, English, or other subjects, but understanding the history of our progress to this point and when we were able to do what a good citizen should do is critical.

The importance of understanding others’ opinions and what it means to become a good U.S. citizen is so essential, yet not represented in our education enough. The National Assessment of Educational Progress or NAEP civics assessment measures civics knowledge and skills of becoming a citizen, which is administered to students at 4th, 8th, and 12th grades. The most recent one was given in 2018 where nearly 13,400 8th graders took it, averaging a score of 153 out of 300, well below a NAEP proficient level. We need change. We need to better prepare our future generations in running our democracy and to better expand the core values of a good citizen in this country.